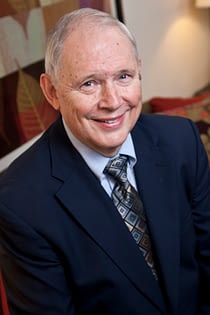 Reverend William “Bill” Hall, II retired from the National Lutheran Communities & Services (NLCS) Board of Trustees in August after 30 years as the Virginia Synod’s Bishop’s designee. Rev. Hall played an integral role in the expansion and growth of NLCS throughout the years.

During his tenure, Rev. Hall served as chairperson for several board subcommittees. While on the nominating committee, he sought out dedicated individuals who could serve on the board and further NLCS’ mission of service to seniors. As the chairperson for the independent living program committee, Rev. Hall acted as a liaison for residents in the first phase of the independent living expansion at The Village at Rockville—A National Lutheran Community. Rev. Hall also served on the governance and executive committees, as well as an ad hoc committee tasked with choosing the site for a new continuing care retirement center (CCRC) in Virginia.

Rev. Hall feels his greatest accomplishment was helping NLCS realize its vision of expanding into Virginia with the construction of The Village at Orchard Ridge—A National Lutheran Community. His role in the planning and development of The Village at Orchard Ridge, from visiting nine sites to find the right location, to the groundbreaking and construction of the CCRC brought much needed support to seniors in his backyard.

At a gathering honoring his 30-year legacy, friends and colleagues reminisced about Rev. Hall’s accomplishments, and even shared personal memories from years past.

Rev. Dr. Richard Reichard, the former Executive Director for The National Lutheran Home (now known as The Village at Rockville) had the privilege of working with Rev. Hall for several years. Dr. Reichard shared the story of first time they met when Rev. Hall left the headlights to his Volkswagen on, killing the battery and requiring a jumpstart.

“Bill’s 30-years began with a jumpstart, and he has been going ever since,” he quipped.

Rev. Hall reflected on all the changes over the past 30 years.

“From where we started as a nursing home to now as a full continuing care retirement center, it is astounding how we have continually changed to meet the needs of seniors. It has been my honor and privilege to serve with so many dedicated individuals.”